Shall We Dance? painting by Todd

“The sending of a letter constitutes a magical grasp upon the future.” Iris Murdoch

An announcement came in the mail, and by mail I mean those actual paper things we find in our mailboxes. The announcement was from an old friend, Dan Nadaner, who is having a show of his paintings at an art gallery in Los Angeles, the LA Artcore Brewery Annex. Happily, I am still on Dan’s mailing list.

I’ve known Dan since we were in junior high school together at La Entrada in Menlo Park fifty-five years ago and at Woodside High thereafter. And though we have had little contact for many years, I consider him a present-tense friend. I was thrilled to get this actual announcement from him in the actual mail so I could hold it in my hands and carry it outside and sit in the garden and look at the little picture of his painting, turning it this way and that while thinking of Dan and remembering some of our shared experiences.

Thinking about Dan reminded me of my friend Mark Russell who lives in Nova Scotia. He and I became friends at La Entrada at the same time I got to know Dan, and because I am still in touch with Mark, I thought he might like to see the announcement of Dan’s show in Los Angeles. He would remember Dan and enjoy knowing our old friend grew up to be a successful artist.

“We live in the present, but the future is inside us at every moment. Maybe that’s what writing is all about…not recording events from the past, but making things happen in the future.” Paul Auster

Then I decided to write a letter to accompany Dan’s announcement and bring Mark up to date on the little I know about Dan’s life. So I found a card I like—a fanciful bird flirting with a flower—and handwrote a letter to Mark.

Writing longhand activates our brains in much different ways than does writing on a keyboard and watching letters and words appear on a screen. As I wrote to Mark about Dan, I was reminded of how very important Dan was to me at several crucial points in my life. I had forgotten many of our shared experiences, but writing to Mark awoke dozens of vivid memories of Dan.

When I finished writing the letter to Mark, I placed it in an envelope, got out my address book, and hunted for Mark’s address. And while writing his address on the envelope, an address that includes the descriptor “Head of St. Margaret’s Bay”, I had a vision of Mark driving a tractor on his farm overlooking that gorgeous bay; and the vision dissolved into memories of shooting hoops and throwing a football and going on bicycling adventures with Mark when we were boys.

“The stories that you tell about your past shape your future.” Eric Ransdell

Now we are all sixty-seven, Mark and Dan and I. I haven’t seen Mark in forty years and I haven’t seen Dan in twenty. But this experience of spending time with Dan’s announcement and then writing a letter to Mark about Dan made me feel connected to both of them again. What wonderful creations are the brain and the mind and our relationships, and how mysteriously and fantastically they collaborate to create our reality.

When I was twenty-seven, I took a break from being a landscaper in Oregon and flew to New Jersey where I stayed for a night with Dan and his wife Janka in their little apartment before moving my base of operations into Manhattan. Dan was doing an internship at the Metropolitan Museum and making short films, while Janka was launching her career as a psychologist.

The purpose of my trip was to meet my literary agent Dorothy Pittman for the first time, she who had miraculously sold a handful of my short stories, and to lunch with those magazine editors who had bought and published my stories and thereby made me a professional writer. During my two weeks of exploring Manhattan, I visited Dan at the Met a couple times, and one day we went to the Museum of Modern Art to take in the vast Andrew Wyeth retrospective.

I was not a big Wyeth fan, nor was Dan, but the show was fascinating because alongside the finished Wyeth oil paintings were the artist’s preliminary charcoal sketches and watercolor studies for each of the famous paintings. After we had looked at several of these paintings and the accompanying sketches and watercolors, I said to Dan, “I prefer his watercolors to the finished pieces. They feel so much more fluid and alive and exciting.”

We then made a quick tour of MOMA’s permanent collection, a tour that made Dan angry. When I asked what was so upsetting to him, he said that this most influential collection in the world had been assembled by a small clique of elitist academics and art curators and wealthy collectors to impose on the culture their extremely limited and already outdated notions of what should be considered important modern art—an art mafia severely constricting the free-flowing evolution of contemporary art.

Dan went on to become a professor of Art at Cal State Fresno and a prolific studio artist. One of the things I enjoyed about Dan’s painting on his announcement was seeing how gorgeously abstract his work has become. Long ago, in the days when I had more regular contact with him, he painted exquisite impressionist landscapes and unpeopled exteriors of beach houses—exciting and simply beautiful. 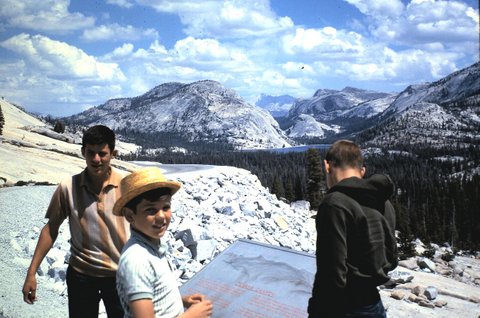 Todd and Mark circa 1961 photo courtesy of Mark Russell

(This article appeared in the Anderson Valley Advertiser January 2016)

My friend Mark Russell recently sent me a photograph taken fifty-four years ago at a pullout on the Tioga Road halfway between Yosemite Valley and Tuolumne Meadows—a spectacular shot of the Sierras, the deep blue sky awash in billowy white and gray clouds, Lake Tenaya shining in the distance.

Mark is thirteen in the picture, I am twelve, and we are on our way with our fathers to backpack from Tuolumne Meadows to Cathedral Lake, there to fish for trout and commune with the nature spirits. In this picture, I am a few inches taller than Mark and we are both skinny boys on the cusp of becoming young men.

Two years later, Mark and his family moved away and I would not see him again for twelve years. I had gone to New York to meet my first and finest literary agent Dorothy Pittman in-person for the first time, and to lunch with the three magazine editors—Seventeen, Cosmopolitan, Gallery—Dorothy had convinced to buy one or more of my short stories. I was funding my excursion with money earned from landscaping a freeway overpass in Medford, Oregon, and on a whim, I called Mark’s parents in Connecticut, they gave me Mark’s phone number in South Carolina, and I called him to see if I might come for a visit.

I had no idea what Mark had been up to since I last saw him, but I remembered him as funny, friendly, extremely creative, and adventurous, and I wanted to see him again. In junior high school, we played baseball and football and basketball together, and he helped me live through the tedious classroom hours by passing me brief little stories he’d written about naughty children doing silly and gross things, and I would nearly bust a gut trying to contain my laughter until class ended. Thus I thought of him as a fellow writer, which was what I aspired to be.

A woman with a strong southern accent answered the phone, I told her I was an old friend of Mark’s, Todd Walton, and she went to fetch him. A moment later, Mark came on the line, his voice an octave lower than when I had last heard him speak. “Todd Walton. I was just thinking about you.”

A couple weeks later, I detrained in Camden, South Carolina late at night and was met at the station by Mark and his beautiful wife Carrie, Mark sporting a dark brown beard and towering over me. He had married into a family of folks who raised horses, and he and his wife lived with his wife’s sister and mother on two thousand acres of woods and meadows and swamps. Mark had become a maker of fine wood furniture, and I ended up staying with him and his wonderful family for a few glorious weeks in November before I headed back to California.

The climax of my visit was attending The Colonial Cup, a famous steeplechase, where I ended up betting on the winner, a spectacular horse named Grand Canyon, and I won a couple hundred dollars. I might have stayed with Mark and his family longer, but my mother called on Thanksgiving and asked me to fly to Palm Springs to take care of my grandparents who were reeling from the suicide of their son, my Uncle Howard.

Thereafter, I heard little from Mark for several years, though I did get a letter from him saying he and his wife were now members of a Buddhist community in which the renowned teacher Pema Chödrön was a leading light. When the Canadian government granted permission for Pema and members of her community to immigrate to Nova Scotia, Mark and his wife moved there.

I’m not sure if Mark and Carrie had their two daughters before they moved to Canada or shortly thereafter, but two daughters they had, and now Mark is a grandfather. He also has a successful garlic and squash and kale farm called Garlic Mountain, lives in the second home he built since moving to Nova Scotia, raises fine horses with his wife, plays the banjo, and has built a number of spectacular wooden boats.

I know these things about Mark from a handful of letters and emails and photographs he has sent me over the years, and when Mark recently sent the picture of us when we were boys becoming men in the California Sierras in 1962, I fell into musing about why he was so important to me and why I have endeavored to stay in touch with him over all these many years despite the great distance between us.

Mark liked me and I liked him. He would come over for supper and to spend the night, and we would camp out under the old olive trees behind my parent’s house, build a fire, and talk about life and the myriad unsolvable mysteries. We went on long bicycle rides together, pushing the boundaries of our known worlds. Mark got me started collecting coins: pennies, nickels, and dimes, and I became fascinated with the history of money, which led me to reading about the history of everything else.

His parents were always kind to me and honored me for being who I was, and they laughed at the funny stories I told, whereas my own parents were routinely disapproving of me and disappointed I wasn’t more studious and academically ambitious.

Mark was an avid Dodgers fan, I a diehard Giants fan, yet our passion for baseball, our interest in the details of the game, was a bond. Mark loved Sandy Koufax, I loved Juan Marichal.

But transcendent of everything, I think, was that we found each other interesting and funny and thoughtful, and when one is eleven and twelve and thirteen, such a bond is golden. I haven’t seen Mark in forty years, but I have no doubt should we ever meet in the flesh again, we will have no end of things to talk and laugh about.